So many Indians taking up jobs in US and Europe especially since late eighties and dominating certain sectors such as IT & medicine , given an impression that the education system in India has finally come of age. A stage came when Obama actually had to take a public stand on the issue of outsourcing urging companies in US to go in for in-sourcing within the country. Most of us in Indian cities take great pride in our elementary education system and we all love to think that children in India are exceptionally good in Mathematics and science subjects. It's a sort of self styled image that's been created over the years.
I was thus taken aback when I came across recently about OECD'S PISA study showing India at the bottom of 74 countries (at 73th rank marginally above Kyrgyztan) while evaluating the performance of elementary education. Let's see what PISA is all about?

OECD's Programme for International Student Assessment(PISA) PISA is an international study which began in the year 2000. It aims to evaluate education systems worldwide by testing the skills and knowledge of 15-year-old students in participating countries/economies. Since the year 2000 over 70 countries and economies have participated in PISA. The PISA tests are carried out every three years (2000, 2003, 2006 and 2009). There were 65 countries initially in 2009 exams and India along with 9 other countries agreed to participate in the exam in 2010 taking the number to 74 countries.
PISA assesses how far students near the end of compulsory education have acquired some of the knowledge and skills that are essential for full participation in society. In all cycles, the domains of reading, mathematical and scientific literacy are covered not merely in terms of mastery of the school curriculum, but in terms of important knowledge and skills needed in adult life.
A very informative video on PISA is available on youtube. It points out that PISA is less interested in knowing whether a student can repeat what’s been taught in the class – like parrots. Rather, the survey is designed to find out whether students can use the reading skills to make sense of the information for eg in a newspaper, government forms or instruction manuals. In it, individual student is not graded on how well he has performed. Instead, the site says that PISA results are analysed and extrapolated at the national level. Many countries now set national goals and benchmarks based on the performance in PISA test. PISA considers an education system successful only when all students from all backgrounds perform well in the test. It examines the characteristics of the successful results of a country – are teachers paid more, do schools decide their own curriculum, class size and so on and once the profile of a successful system emerges, it can be used by other countries for their education system. PISA is not about achieving high scores.
India's participation and findings
India decided to undertake PISA evaluation in 2010. The Ministry of HRD decided that about 16000 children in Tamilnadu and Himachal Pradesh ( the two States considered best in the country) would take the examination. The PISA 2009+ results, which are both official and are beyond gain-saying, are unspeakably bad. They confirm the worst of what anyone has been saying about the levels of learning in India elementary education. The shocking findings are:
In reading, of the 74 regions participating in PISA 2009 or 2009+, these two states beat out only Kyrgyzstan.
In mathematics, of the 74 regions participating the two states finished again, second and third to last, again beating only Kyrgyzstan.
In science, the results were even worse, Himachal Pradesh came in dead last, behind Kyrgyzstan, while Tamil Nadu inched ahead to finish 72nd of 74.
But just coming in last (if we can dismiss as a relevant comparator for India a tiny Central Asian state) does not convey the enormity of how bad these results were, as not only was India last, it as far, far, behind its aspirations, both at the bottom and at the top levels of performance.
PISA expresses the levels of performance in two ways, an overall index number and the
fraction of students achieving various “levels” of achievement. The PISA index numbers for each subject are scaled so that the typical OECD student is at 500 and the standard deviation across OECD students is 100.
The testing of thousands of students allows the results to present not only the average but also the worst (5th percentile) and best (95th percentile) students do in each country/region. PISA also classifies student performance into “levels” that represent different degrees of mastery of the material. I wish to quote a comparative study undertaken by Lant Pritchett : 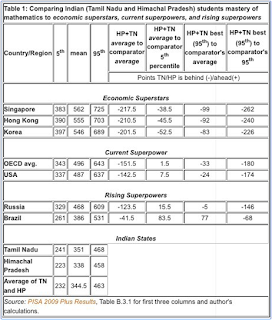 Table 1 compares India’s performance to three groups of countries. The economic
Superstars have successfully completed the transition from poor to rich economies in just two generations – Singapore, Hong Kong, Korea (China’s only results are just for the city of Shanghai, which are the highest scores of any region tested, but this is too a-typical to really be comparable) and India aspires to their sustained success economically.
The current superpowers are represented by the USA and the OECD average reflects India’s aspirations as a superpower. The rising powers are represented by the BRIC countries of Russia and Brazil which reflect the rise of the emerging markets. Compared to the economic superstars India is almost unfathomably far behind. The TN/HP average 15-year-old is over 200 points behind. If a typical grade gain is 40 points a year Indian eighth graders are at the level of Korea third graders in their mathematics mastery. In fact, the average TN/HP child is 40 to 50 points behind the worst students in the economic superstars.
Equally worrisome is that the best performers in TN/HP – the top 5 percent who India will need in science and technology to complete globally – were almost 100 points behind the average child in Singapore and 83 points behind the average Korean – and a staggering 250 points behind the best in the best.
As the current superpowers are behind the East Asian economic superstars in learning performance, the distance to India is not quite as far, but still the average TN/HP child is right at the level of the worst OECD or American students (only 1.5 or 7.5 points ahead).
Indians often deride America’s schools but the average child placed in an American school would be among the weakest students. Indians might have believed, with President Obama, that American schools were under threat from India, but the best TN/HP students are 24 points behind the average American 15 year old. Even among other “developing” nations that make up the BRICs India lags – from Russia by almost as much as the USA and only for Brazil, which like the rest of Latin America is infamous for lagging education performance does India even come close – and then not even that close.
So? what's the takeaway?
There are some very important general findings that emerge from the PISA evalutation such as: 1. Girls do better than boys in reading skills in every country that participated; in OECD countries, they did exceptionally well than boys almost equivalent to an extra year in school;
2. There is no major difference between boys and girls in how they perform in science;
3. Boys generally do better than girls in mathematics
4. Early tracking is not generally good for overall better performance and need not be encouraged; it also encourages greater inequalities among the students esp those from disadvantaged group
5. Given the opportunity and support, all children have the potential to excel
6. Home background has a major role in the student’s success in school. If there are no books at home and if children don’t see their parents reading, they will be less inclined to read
7. It’s not the number of teacher but the quality of teachers that determines the performance of children in schools
8. A country doesn’t have to be wealthy to be able to provide high quality of education to its students (Shanghai and Poland are the examples)
9. Country’s performance in PISA does change overtime. Chile, Poland, Germany etc have shown improvement between 2000 and 2009
10. Successful education system make education a priority .
Whats required in India is first and foremost, come out of the denial mode and acknowledge that something is seriously lacking in our elementary & secondary education policy. The general findings as mentioned above are extremely important. It's not just about certain schools and certain students belonging to certain strata doing well. It's about complete overhaul of the elementary & secondary education which makes education more relevant in our everyday life. It's time we realise this.
For the purpose of census, a person aged 7 & above who can read and write in any language is considered as literate. The country has made very impressive progress in terms of spreading the education and increasing the literacy levels in the country over the years. 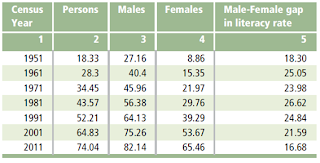 What's now required in emphasis on the quality of education and that will make a difference. Quality education is not just the right of privileged few and a sincere policy intervention in this direction will automatically improve the intended learnings and this is the takeaway from the PISA findings.